--> Is there any part of this country yet left untouched by the magic of the dollar store? Be it the national Dollar Tree chain, the Crazy Dollar Daze! aisle of your local Legitimate Shopping Concern, or (my personal favorite) the random-mix-of-objects-involving-a-stunning-variety-of-languages-on-the-labels emporia that make up fully 89% of all retail establishments here in Brooklyn, these off-price-wonderlands are truly the costumer’s best friend.

Falling firmly as I do on the “It only has to look expensive” side of the fancy-ass-stripper debate,* I make frequent use of the dollar stores in my local habitat when crafting even the most classic costumes. Not to say that I don’t haunt the Garment District like a colorblind, bling-obsessed ghoul; but there are few projects wherein I fail to make use of something purchased for $1.08-with-tax, and more than a few that have been entirely created exclusively from an eyebrow-raising collection of off-price objects.

Being such a frequent visitor to the half a dozen or so of the dollar stores of which I am most fond - The One With The Red Awning, The One Where The Radio Is Always Too Loud, The One That Doesn’t Have Votive Candles, The New One**, the DII (actual name) and The Other One – I’ve found that there are certain objects that I pick up over and over again, to wit:


• Sun Visors: No longer the exclusive property of old ladies in Florida grocery stores, the classic sun visor when inverted is the perfect base for most showgirl headdresses: lightweight, sturdy, comfortable, cut-able, glue-able, and often padded for comfort in just the right place, these seasonal buggers are worth their weight in Swarovskis. Since they disappear in the fall I snap them up by the dozen in the summer months. (As an added bonus, many visors now feature Engrish slogans and delightfully nonsensical illustrations!)


• Those Lacy Elastic Headbands You Put On Baby Girls Before They Have Enough Hair For Actual Barrettes And Stuff: Coincidentally, these innocent objects look a hell of a lot like garters – but at a much lower price than the average costume shop/stripper store/bridal salon charges for ten inches of frilly elastic, if the bachelorette party in the third row doesn’t give it back after the show it’s not the end of the world. Actually, I deliberately use these a lot as toss-into-the-audience pieces … whether or not you choose to remove the occasional pink teddy bear decoration first is a matter of personal taste.

• Cheap-Ass Pantyhose: Personally I like a good stocking peel during a floor show, though I’m crap at keeping track of where the damn things end up. Just snip the legs off these babies (leave about half an inch of control-top to keep the tops from rolling) and you have single-use, disposable stockings.


• Fake-Ass Flowers: I love fake flowers; I always have. If I could, I’d cover my living room with the them, floor-to-ceiling - but since living in a shared space makes that less than ideal I’ve settled for covering costumes with them. There is certainly a time and a place for well-made, super-realistic blooms (Amber Ray’s gorgeous hair accessories, for example), but sometimes it’s a matter of quantity over quality and you just need a shit-ton of inexpensive plastic flowers to glue to stuff. When you snip off the stems the petals tend to come apart, but as long as you sew or glue all the layers together, dollar store flora are perfect for huge impactful splashes of color.

• Curtains: Although I’ve done it as a deliberate challenge***, I wouldn’t recommend using discount-store curtains as the base for sewing projects: they’re itchy, they’re stiff, they tend to unravel at seams, and usually they smell funny. But occasionally they’re just the right amount of gaudy, fringey or translucent to be incredibly useful as trains, veils or drapes.


• Holiday Decorations: Obviously, the dollar store is one of your first stops when putting together holiday-specific acts; but in the last few years my local Bastions of Cheapness have started featuring holiday ornaments and decorations in colors and degrees of blinginess that make for fabulous costume pieces any time of year. We’ve just entered the season of Glittery Things In Aqua, Turquoise, Hot Pink & Lime and I’m already stocking up on random ornaments, bows, stars and birdies to accessorize with in coming months. The Christmas and Easter seasons are great for bright colors and shiny or feathery things; New Years is lousy with glitter; Thanksgiving is perfect for stockpiling fake fruits and leaves; and Halloween – apart from the obvious creepy-themed items – is the time to bulk-purchase crappy boas (cut them up and use them as trim), cheap gloves, and light-up decorations that can be stripped for parts.

• Hula Hoops: Virtually useless for actual hooping (or so I’ve been told by those that hoop), cheapo hula hoops are perfect for building lightweight ‘skeletons’ for fabric structures, and can be used for hoop skirts and panniers in a pinch (or when steel boning isn’t available).


• The Craft Supply, Jewelry, Hair Ornament, and (depending on where you live) Quinceañera-Favor Aisles: Although many of the items in these aisles aren’t useful on their own, they can provide great pieces for the base of projects: Styrofoam balls, clips and clasps, foam sheets, googly eyes galore, random bows and glittery things.

• Party Tablecloths (Not technically a costume piece, but the single dollar-store item I purchase most frequently): The responsible stripper brings a tarp to cover the stage when making a wet, oily, painty or glittery mess; the fashionable, responsible stripper picks up a tablecloth from the dollar store party aisle in a color or pattern that compliments her or his costume. Bam.

Several cautionary notes:
• While dollar-store nail polish is an excellent craft item, use it (and all discount cosmetics) advisedly on skin, hair and nails: that shit can burn, stain, or worse.

• Many items obtained at the Palace Of Low Prices retain a corresponding odor, something reminiscent of sugared petroleum. It's advisable to air such items out for a while before using them, and don't store them in closed bags or containers.
• Three tenths of the balloons in any given bag purchased in the Hey Ain't It Cheap! store will have factory-installed holes. This is to keep you on your toes. Plan ahead and buy an extra bag or two.
• Though fine for use as props, never never never eat anything from the dollar store.

* With frequent forays into the “let the costume serve the number” and “a two-thousand-dollar costume doesn’t automatically make a great act” camps, plus a permanent alliance with the House Of Not Every Costume Needs To Look Exactly Like Everyone Else’s.

*** I tend to craft as a grief-management mechanism; following the death of a close friend recently I found myself in desperate need of a project but with practically no materials at hand, and with no chance of getting to the Garment District before everything closed for the weekend. After a walk to the neighborhood discount store, $25 in curtains, cheap underwear and craft trim (plus some scraps from the studio fabric bin), and 10 hours of Dr. Dre on Spotify, this was born. (Ironically, the hair flower is one of Amber's actual legit pieces of art.)

Newer Post Older Post Home
Subscribe to: Post Comments (Atom)
I'm a New York City-based neo-ecdysiast with a decade of experience performing and producing burlesque around the world. I am overeducated and overtired. Also I make things. So that's pretty much what this is all about.

There's a bunch of pretty pictures and a performance calendar and things like that over at NastyCanasta.com.

This is just here to make for a cute link image. 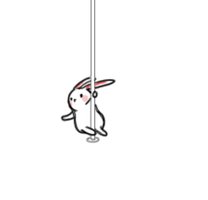